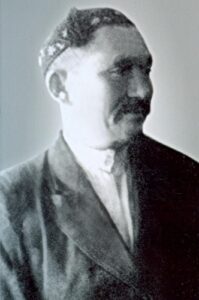 Akin-improviser – Sapargali Alimbetov was born in the Koitas tract, located at the foot of Mount Kandygatai.  Now it is the village of Egin-Bulak.  Twins appeared in Alimbet’s family: the boy was named Sapargali, the girl – Toleu.  Toleu was born first, and Sapargali is used to thinking of her as an older sister.  The disease left the head of the family early, and all care for the family fell on the shoulders of Erkebala’s mother.

The first to notice Sapargali’s unusual talent was his father’s friend Zaisenbai, who was famous not only for his skillful hands in shoemaking and carpentry, but also as an expert on folk songs, a singer, a dombra player.  Zaisanbai taught Sapargali the first music lessons, introduced him to the songwriting of the Kazakh people, taught him to play the dombra – he opened up the amazing world of art for the young men.  Soon, the people began to call Sapargali “the son of Alimbet is a poet”.  The first published collection of Abai’s songs became a great discovery for the young poet.  Sapargali knew and sang all the songs of Abai without exception.  Thanks to Abai, Sapargali discovered the souls of Russian poets.

The words in the songs of Sapargali-akyn, dedicated to the post-revolutionary creative activity of the Soviet people, played in a completely new way, brightly.  People fell in love with the lyric poems of S. Alimbetov.

The poet is close to the people, because he lived with everything that was dear to the heart of every worker.  He never separated from ordinary people.  He wrote about the unequal position of women, about collective farm construction, praised heroic deeds, scourged evil and violence.  In 1924, a poem about the great leader, V.I.  Lenin.

Poems, tolgau of Alimbetov were published in republican and regional newspapers.  The author of the poems “Meyir Batyr”, “Moldabai Paluan”, “Koigeldi Batyr” and others. And during the Great Patriotic War, the poet was with the people and helped them overcome difficulties with songs.  In 1945 S. Alimbetov was awarded the Order of the Red Star.

Sapargali Alimbetov died on October 10, 1954.  The poet’s grave is a historical monument of republican significance and is located on the territory of the Mikhailovsky village council of the Zharma district of the East Kazakhstan region.