The era of Abai in local history sources 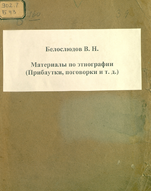 Viktor Beloslyudov, artist and ethnographer , was born in Semipalatinsk. He made a significant contribution to local history, is the author of research works, including “Materials on ethnography”, samples of oral literature – proverbs collected from 1911 to 1915 in the Semipalatinsk region, Zmeinogorsk district, Tomsk province, the city of Semipalatinsk, Kokpekty, Zaisan, Zyryanovsk , Nikolaevsky mine. He researched the history and culture of the Kazakh people living in the Irtysh region, and collected samples of Kazakh folklore, taught drawing in elementary school and gymnasium in Semipalatinsk, translated and published the works of the great Abai in Russian. In Beloslyudov’s work, the greatest interest is represented by numerous drawings, watercolors, sketches dedicated to the life and everyday life of Kazakhs, the nature of East Kazakhstan. V.N. Beloslyudov, who was especially fond of children, carefully collected samples of oral literature, which children from different settlements and auls used in their games. 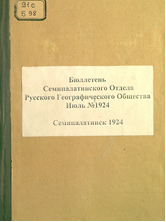 “Bulletin” №1 for July 1924 presents the message of the organizational Bureau of the 1st Provincial Local Lore Conference, scheduled for August 24-30 of this year in the Semipalatinsk province, the procedure, general issues and the program for the work of the sections. At the meeting of the Semipalatinsk Department for April 20 of the specified year, a member of the Department I.M. Evseenko presents his work on the topic “To the 30th anniversary of V.V. Sapozhnikov “, which introduces the numerous travels of the botanist in Altai, in Sauyr, Semirechye and Tien Shan. This publication became a source of information and provides a schedule of meteorological monitoring for 1923 of the Semipalatinsk meteorological station P. Solomin. The article “Life of the Department” included in the bulletin, since January, acquaints with the scientific and educational work of the Semipalatinsk Department. The Bulletin published a list of the members of the Division who died in 1916-1923 under the title “Deceased Members of the Division.” At the end of the publication there is a complete list of members of the Semipalatinsk Geographical Department as of July 1, 1924

Gerasimov B. Along the apiaries of the Ust-Kamenagorsk district. – 55 p.

Boris Gerasimov is the author of several studies of East Kazakhstan honey, which today has become a brand with a recognized world name as “Altai honey”, “East honey”. In his extensive work “On the apiaries of the Ust-Kamenogorsk district” the author writes that in the 1800s N.F. Arshenevsky brought from Russia 4 hives and two specialists of Bashkir nationality who looked after them, and placed them in the village of Bobrovka near Ust -Kamenogorsk. He tells about the history of beekeeping in the Eastern region, in particular about the first professional kind of beekeeping, which was founded by General Shaitanov and about frame beekeeping, which began with the apiary of the military foreman Shaitanov.

Since 1812, Ulba beekeepers have repeatedly participated in the Nizhny Novgorod and Irbit fair and in practice have proved the high quality and taste of their honey, which has become an indicator of the rich flora of the East. In the study, along with E.P. Michaelis presents the beekeeping of the region and A.N. Fedorov, a professional beekeeper known in Russia and Kazakhstan, whom the Americans invited for cooperation and in the history of the eastern region he was called “the father of rational beekeeping.” 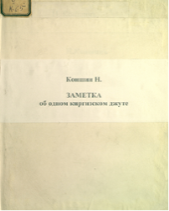 Nikolai Konshin, named by the scientist N.V. Alekseenko “by a miracle of the second half of the 19th century and the beginning of the 20th century”, one of the best local historians who laid the foundation for Semipalatinsk local history. The scientist, ethnographer, ethnographer, remained in the history of the city as the first head of the Semipalatinsk provincial archive, organizer of the Accounts Committee and local history work of the Semipalatinsk Department of the Geographical Society. The source of the study “A note on a Kyrgyz jute” was the case preserved in the archives of the Semipalatinsk regional administration “On taking measures to ensure the fate of the suffering Kirghiz of the Ayaguz and Kokpektinsky districts” of the Frontier Department of Siberian Kazakhs in 1841-1849. The data of 1840-1841, presented in the case, tell about the causes of jute due to strong snowstorms and ice in Semipalatinsk, Karkaralinsk, Zaisan, especially the Ust-Kamenogorsk district on a large scale. The work of N.Ya. Konshin tells about the inactive assistance of the Border Directorate of the Siberian Cossacks, provided to the residents of the Semeysky, Karkaralinsky, Zaisansky, Ust-Kamenogorsk districts, who were exposed to jute in 1840-1841, as a result of which many livestock died and were left without a livelihood Bura-Naiman, Kokzharly, Saryzhomart, Teristanbaly, Matai, Kerey, Uak, Karauyl-Zhasak. Archive documents indicate that people settled near the Char River and were engaged in agriculture, and only 20-30 years later the Kazakhs came to their senses after the strongest and notorious jute called “ak tyshkan”.

The Semipalatinsk Regional Statistical Committee, organized by political exiles in 1878, became the first local institution that became interested in studying the history, culture and life of the region’s population. Its first secretary was the political exile Yevgeny Petrovich Michaelis. The scientific activities of the committee were reflected in the regular published annual reports. This report was compiled by the acting Secretary of the Committee V.P. Nikitin and contains information about the personnel of the Committee, its activities in collecting, processing statistical data necessary for the annual statistical report of the “Survey of the Semipalatinsk region” for 1894. The section “Library of the Committee” contains the names of publications received by the library in the form of exchange or free of charge from various institutions.